It’s interesting to consider what makes one framework or library more popular than another. While I don’t have a definitive answer to that question, I do have a bit of data that provides a snapshot of JavaScript framework usage over the past year.

It’s worth asking if the popularity of a framework or library matters. For me, the answer is a qualified yes. It does matter, but how much it matters depends on the project, the team and the organization making the decision. It’s one factor among many, with popular frameworks and libraries providing big communities that can help speed development, among other benefits.

Now, about the numbers and the graph below. They’re from npm-stat and you can go there and play around with the chart generator yourself. The graph is showing monthly downloads over the past year, and rather than take these numbers as absolute truth, I think it’s best to use them for relative comparison. For reference, here’s what npm has to say about their download counts.

You can click on the image below to see a larger version. 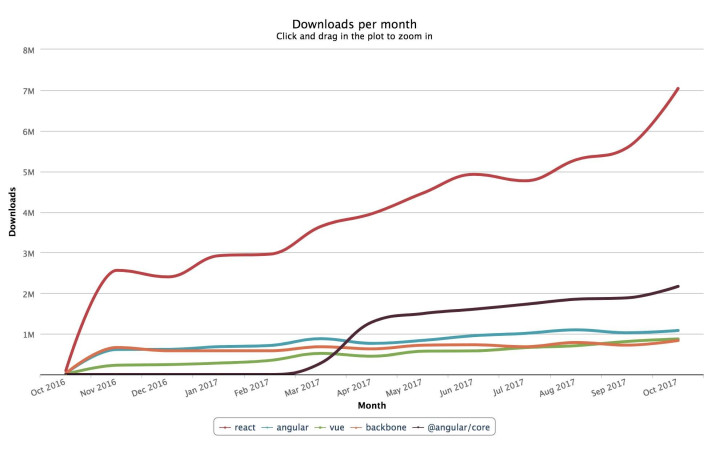 Angular, the black line, was obviously being used heavily prior to late March of 2017. They had a namespace change which accounts for it showing up where it does.

Before we talk about what these data might mean, let’s pull a few numbers out to help us see things a bit more clearly. Note: the data for Angular begins in April 2017, the first full month of its availability.

The first thing that sticks out to me is that React absolutely dominates. It’s by far the most downloaded according to these numbers, and if you work in this space, your daily experience probably backs that up. We also see a spike towards the end which is no doubt React 16 making a big impact.

Another thing that I see is that all of the frameworks — even the “old” ones — have increasing monthly downloads. That really surprised me. Angular.js and Backbone have surprising endurance.

Also, check out the explosive growth of Vue! This is the year that Vue arrived as one of the top frameworks. Even so, it’s current usage is similar to the venerable Backbone and far behind both React and Angular.

Interesting stuff. It will be fun to check these numbers in a few months to see how things have developed.